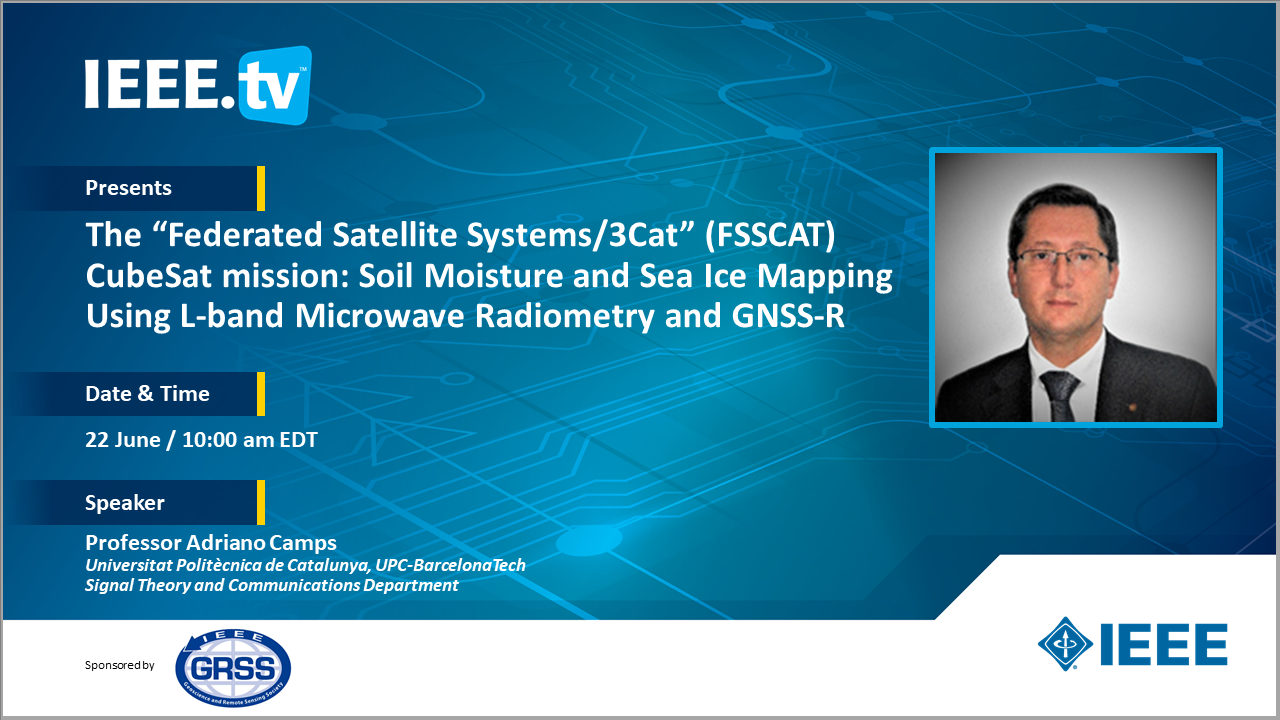 FSSCat, the “Federated Satellite Systems/3Cat” mission was the winner of the 2017 ESA S3 (Sentinel Small Satellite) Challenge and overall winner of the Copernicus Masters competition. FSSCat consists of two 6 unit cubesats carrying on board UPC’s Flexible Microwave Payload – 2 (FMPL-2), an L-band microwave radiometer and GNSS-Reflectometer implemented in a software defined radio, and Cosine’s HyperScout-2 visible and near infrared + thermal infrared hyperspectral imager, enhanced with PhiSat-1, a on board Artificial intelligence experiment for cloud detection. Both spacecrafts include optical and UHF inter-satellite links technology demonstrators, provided by Gölbriak Space and UPC, respectively. This presentation will provide a description of the mission, and the main scientific results of the FMPL-2 obtained during the first three months of the mission, notably the sea ice concentration and thickness, and the downscaled soil moisture products over the Northern hemisphere.

Adriano Camps was born in Barcelona, Spain, in 1969. He joined the Electromagnetics and Photonics Engineering Group, Department of Signal Theory and Communications, UPC, as an Assistant Professor in 1993, Associate Professor in 1997, and Full Professor since 2007. In 1999, he was on sabbatical leave at the Microwave Remote Sensing Laboratory, of the University of Massachusetts, Amherst. His research interests are focused in microwave remote sensing, with special emphasis in microwave radiometry by aperture synthesis techniques (MIRAS instrument onboard ESA’s SMOS mission), remote sensing using signals of opportunity (GNSS-R), nanosatellites as a tool to test innovative remote sensors, and RFI detection/mitigation techniques. He has published over 233 papers in peer-reviewed journals, 8 book chapters, the book Emery and Camps, “Introduction to Satellite Remote Sensing. Atmosphere, Ocean, Land and Cryosphere Applications,” Elsevier, 2017, 860 pages), and more than 472 conference presentations, and holds 12 patents. He has advised 27 Ph. D. Thesis students (+ 8 on-going), and more than 140 final project and M.Eng. Theses. According to Google Scholar/Scopus his h-index is 52/40, and the number of citations is 11059/7653.

He is the Scientific Coordinator of the CommSensLab – María de Maeztu Excellence Research unit at the Department of Signal Theory and Communications. Within CommSensLab, he co-led the Remote Sensing Lab (https://prs.upc.edu/), and leads the UPC NanoSat Lab (https://nanosatlab.upc.edu/en). He is the PI of the first four UPC nano-satellites missions: 3Cat-1 (1U CubeSat with 7 small techdemos), 3Cat-2 (6U CubeSat with the first dual-frequency dual-polarization multiconstellation GNSS-R payload), 3Cat-4 (1U Cubesat with a microwave radiometer, a GNSS-Reflectomer, and AIS receiver implemented in a SDR, selected by “ESA Fly your Satellite!”), and FSSCat, a two 6U CubeSats, winner of the ESA Sentinel Small Satellite challenge and overall winner of the Copernicus masters competition in 2017. It was launched on September 3rd, 2020 in the VEGA SSMS PoC flight.

Enter a brief, clearly worded question below and submit. Questions will be answered during the webcast in order of popularity and as time permits.

Be sure to visit the "Most Popular Questions" tab and vote.
* Required fields