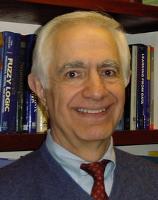 George Lendaris is Professor of Systems Science and of Electrical & Computer Engineering at Portland State University, a Life Fellow of the IEEE and a Fellow of the International Neural Network Society.

His research interests have long been focused in the arena now called Computational Intelligence, starting back in the 1960s at the GM Research Labs in Santa Barbara, CA, following receipt of his Ph.D. from the University of California, Berkeley. His attention has been largely focused on the Neural Network (NN) aspect of Computational Intelligence, but has also included Fuzzy Logic.