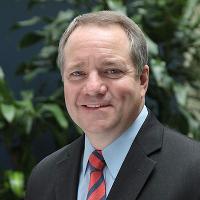 Mr. Hamilton serves as President and Chief Executive Officer of Southwest Research Institute (SwRI®), one of the nation’s largest independent providers of advanced scientific and applied technology solutions. SwRI, a not-for-profit 501(c)(3), provides solutions for problems encountered from deep sea to deep space, and practically everywhere in between. From the pressure hulls of deep-diving submarines to the Pluto system and beyond, SwRI thrives on providing broad technical expertise and vast supporting infrastructure for the benefit of clients (government and commercial) and the public. SwRI conducts more than $500 million of research each year. The organization was founded in 1947 and Mr. Hamilton became only the fourth SwRI President in October, 2014. In February 2017, Mr. Hamilton was honored to accept an award, on behalf of the Institute, as SwRI was named San Antonio’s Business of the Year.

Mr. Hamilton holds an M.S. degree in Engineering and a B.S. degree in Aerospace Engineering, both from The University of Texas at Austin. He has been a Professional Engineer since 1993. During his career, Mr. Hamilton has provided technical expertise to myriad programs in government and industry while also providing business and community leadership. His multidisciplinary technical expertise includes engineering, science, and risk assessment.